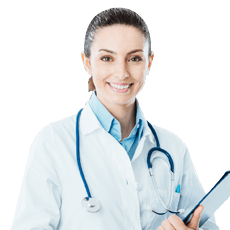 In 1976, MD. Magdalena Karková graduated from the Medical Faculty of UPJŠ in Košice. After school in 1977 until 2012 she worked at the Department of Radiodiagnostics and Nuclear Medicine of the UNLP in Košice. From 2004 to 2012 at the USG Department of the East Slovak Cancer Institute. After specialization I and II. a degree in radiodiagnostics focused on oncoriodiagnostics and mamodiagnostics. Since 2014 she has been working at a specialized mamodiagnostic clinic of the Center for Fetal Diagnostics in Košice. Since 2012, she has been a member of the Medical Corps for the theoretical and practical part of the specialization study program in the field of radiology at the Faculty of Medicine of UPJŠ in Košice. During her practice she completed several internships and educational projects, eg. as part of the HOPE project in the Czech Republic "Multidisciplinary Approach to Breast Cancer", "Radiodiagnostics of Breast Cancer" and others.